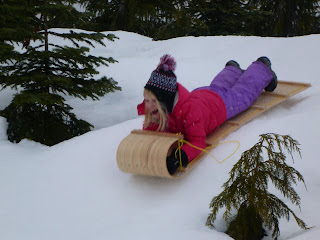 With New Years Day being on a Sunday, it allowed us to get this challenge off to a strong start. The past week was so fun. Natalie and I got to spend many hours together doing different things. Things we would not usually do. I decided early in the week that I was going to turn off the TV. Done deal. We had about four days without staring at the black hole in the living room. It has been nice a quiet. When we wanted some background noise I would stream radio through my Ipod touch, plugged into the stereo. With out this distraction of television, Natalie was more willing to help out with chores, as well as doing fun things. We cleaned and cooked together. We played Yahtzee and Go Fish by candle light. We spent many hours outside. We went on another un-successful Geo-caching trip. I must learn more about this activity so we can actually find them.... and tips? 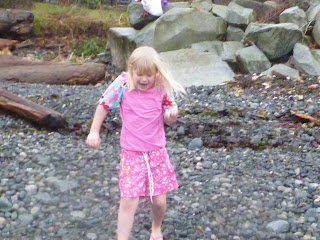 The initial adventure of the New Year was on the first morning of 2012. We stayed the night in Merville at a house on the ocean, so Natalie, my girlfriend and I went for a polar bear swim. I was all ready to do it, the other two not so much. I think Natalie liked the idea, but she must have forgotten that it was January, it was windy and rainy. She may have put her toes in the frigid water of the Salish Sea, that is it. I had to wade out beyond the three foot swell to dive in. After emerging from my breath seizing dip, I had a tough walk out. My legs were so numb that I could barely keep upright. I actually scrapped my ankle on a rock and did not know it until I went in the house and saw blood in the shower. Natalie was squealing and hollering about how cold it was. It was so funny. We were all laughing, it was fantastic. 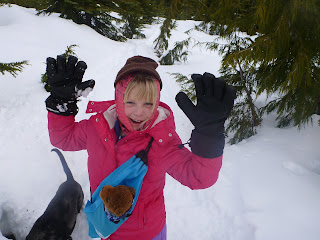 Today I took Natalie and Marshall up Mount Washington for another snowshoe. The conditions were perfect for our type of shoes. There was no powder and it was compactable and had some ice on the top. I could mush along and only sink a few inches with out the tails on my MSR shoes. Natalie had no problem. This is so nice for kids. The float from a snow shoe is more than enough and she hardly sinks at all. Marshall had a blast bounding and chasing snowballs. He is so fun to watch. We did about an hour loop on trail and off. I taught Natalie how to jump off little hills and tried to show her how to ski down bigger hills. The sun was trying to poke out and bathe us in its rays. I learned to double check your kids kit. Upon parking at the mountain, we discovered that Natalie forgot one of her gloves. Luckily it was warm enough and I didn't need my gloves so I put them on her hands. It was the best time so far I had for snowshoeing. If she had more stamina I would have loved to spend more hours up there hiking about. 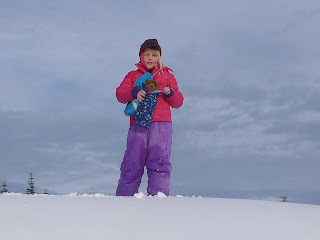 I had such a great holiday but back to work tomorrow. I spent loads of time outside, adventuring and also had more time to research simple living and tiny homes. Feeling refreshed and ready to move forward. Once again thoughts about how to change things in life, reducing stuff and re-assessing whats important. I will write more about this in the future. There are some exciting things going on inside my head.
Posted by Blayne Prowse at 4:43 PM