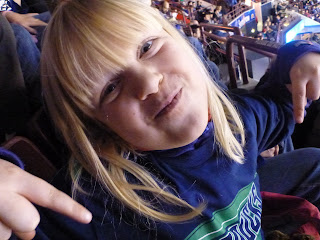 We are all Canucks

Natalie and I were surprised with Canucks tickets for Christmas from my sister. We were both so excited to receive these tokens of the season, as was my sister to gift them to us. Natalie had been asking me to take her to a game for a few years now. Tickets are not easy to come by and they are very expensive. Not to mention coming and going from Vancouver, hotels and meals. Two of my friends had made many trips to Vancouver for different games, and they had gotten into using the public transit from the Horseshoe Bay ferry into downtown Vancouver, and taking it back again the next morning to come back to the Island. I was a little nervous about doing this, I had not used transit very much, and never in an unfamiliar town, let alone a big city. I decided that it was worth the ease and money saved to go out of my comfort zone, finding adventure on city transit. 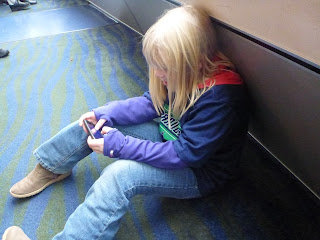 The game was this past Saturday, January 21st against the San Jose Sharks. I had a hotel booked close to Rogers Arena, was learning the Translink schedule and Google mapped the route to see where to get on and off the bus. I was all ready and assumed the game was at 7, like they are 95 percent of the time. Listening to the radio Monday morning it was revealed that the game was actually at 1. Oh no, didn't even bother to look at the ticket to see what time it was on. Luck that I found out days before or we would have been just getting off the ferry when the game was to start. What a disaster, my name would have been mud. I cancelled the hotel room, and adjusted plans to make a day trip for the game. 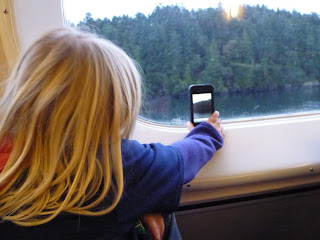 Making a video of Newcastle Island

We were up at 5:30 am for a quick breakfast and left the house an hour later. I was unsure if parking would be available for the day. The second ferry terminal from Naniamo was closed because of a ferry crashed into it and all traffic has to go out of Departure Bay. There was plenty of parking when we arrived at the terminal, quickly bought a parking pass and walked to the ticket booth. Me, Natalie and Dusty. The waiting room was packed with Canuck fans. Every other person had a jersey on. There must have been a couple hundred headed to the game. It was very cool. 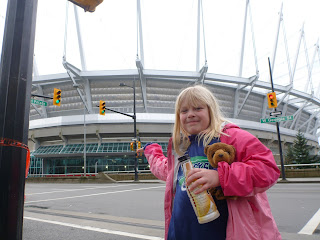 We docked in Horseshoe Bay after an uneventful, packed ferry ride. I tried to get Natalie to follow me outside into the wind, she quickly turned around and got back inside, saying that is was much to cold for her. I laughed.  At the departure gate, 4 transit buses were waiting. I was in no hurry as we had more than two hours before the game started. Fortunately we were patient and got on the fifth bus that came to pick up the extra travelers. This bus wasn't full so we were able to have a seat for the duration of the ride. The bus only stopped once near Park Royal shopping center, then we crossed the Lionsgate bridge, motored through Stanley Park and up West Georgia. Natalie was asking me where the Fox building is. We listen to the Fox radio station every day, and I pointed it out to her. She was impressed. 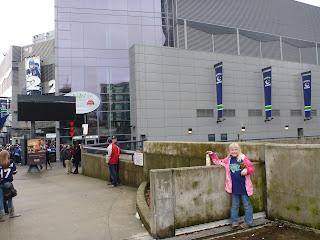 We disembarked the bus about three blocks from Rogers Arena and went to Moxies for lunch, in the Sandman Hotel. A big hamburger and we were fueled up for the excitement. We proceeded to Rogers Arena with the crowd, found our gate and after a brief wait we were allowed into the building. Finding our seats, the usher gave Natalie a signed card, by Finn the Canucks mascot. Awesome for her. The pre-game skate was cool and we stood to sing "Oh Canada" with Mark Donnely. We had a moments silence for Sarah Burke, the Canadian skier who passed away a few days before from injuries sustained during a training accident in Utah. 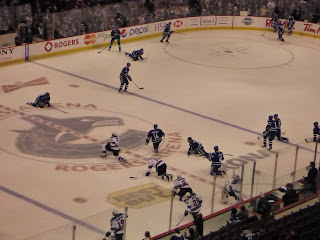 Pre-game skate. Burrow was yapping at the Sharks players

Natalie kept repeating to me "I can't believe we are here, I can't believe we are hear" I was feeling very emotional, being so happy that we were there together. It was a wonderful time. The game was on, the crowd was loud after the Canucks scored in the first minute of the first period. Natalie had to cover her ears when the big horn went off after the goal. The Sharks answered with two unanswered, before Ryan Kesler scored a beautiful goal coming in off the wing and beating Anti Niemi high glove with a precision shot. A thing of beauty. Cody Hodgson scored his second of the night with a fluke goal late in the third, after San Jose tied the game again. Hodgson flicked the puck at the net from behind the goal line and it somehow found its way into the net. The win was meant to be. The Canucks power play was really dodgy, and it gave up a short handed goal. We even got to see a good old hockey fight in the second. It was a great game, and to have a win made it even better. 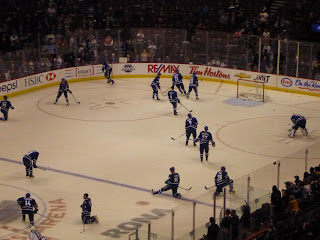 
We walked out of the Arena quickly after the game ended. We walked up Cambie street to the bus stop. I enviously looked at the bicycle lanes that paralleled the street. These bike lanes are controversial, but I feel it shows a forward thinking local government. The bus left at 4 p.m. and we were able to get on the 5 o'clock ferry to get back to Vancouver Island. We beat the crowd to the cafeteria for dinner and then found a seat beside the gift shop. Natalie went in and spent the $20 that her Poppa had given her. She and I spent the rest of the trip reading. We unloaded the ferry and soon were in the car back home. We arrived back home at 8 p.m. 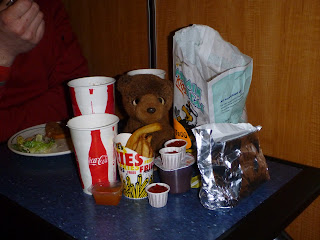 This adventure was full of fun moments and new experiences. We now know how to afford a day trip to Vancouver, and use the transit bus instead of bringing a vehicle over. I will be planning more trips like this. Hopefully we will get to a B.C. Lions football game and to Science World. Natalie was an enjoyable partner to have on this voyage. She was patient and calm. That made me have a calmer, more patient time. I can't wait for our next adventure.