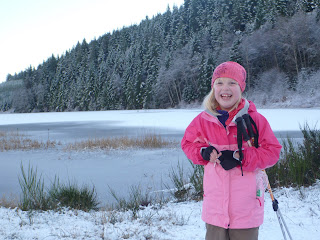 "Seriously, I can eat them all"

I was just finishing up building a bookshelf for Natalie's room on Saturday afternoon, and the sun was shining. It was far too nice to spend the afternoon indoors. I was juggling the idea of doing some house organizing. The thought of being outdoors in the sun won that argument with head spinning speed. 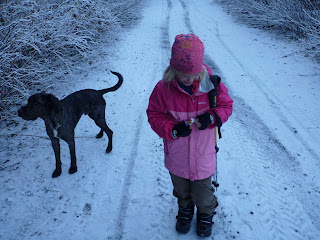 We layered up with Merino and at 2 o'clock we headed for the trail with Marshall in tow. It was pretty cold out. An inch of snow fell the night before and it was crunchy under foot. We slowly wondered out and up on the logging road enjoying the warmth of the sun and chatting with mountain bikers. Natalie was busy munching on pistachio nuts, walking about 10 meters behind me. No matter how slow I walked, she would slow down. I just couldn't keep her close. I think she likes it that way. 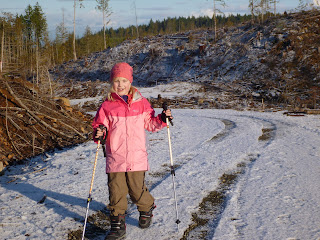 We made it to the lake with out too much issue. Natalie was still going strong. I often am nervous since she can suddenly have a burn-out and start crying. The sun was setting quickly and I knew we had to get home before it started getting dark. I was unprepared with no headlamp or flashlight. 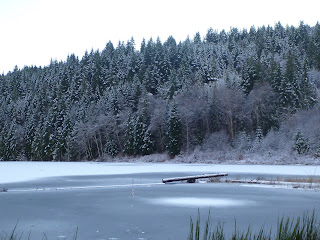 Allen lake is the main water reservoir for Cumberland and Royston. It is actually quite a pretty lake althought it would be nicer if it wasn't logged right to is shore almost all the way around it. One nice stand is still present on the east side of the lake where a fun mountain bike trail called Tea Pot is located. Today Allen lake was frozen almost completely. The opposite side from where we were was open since it is bathed in sunlight because of all the trees being removed. I had allowed Natalie permission to munch down all the rest of the Lifesavers in the roll once we got to the lake so she would keep moving. For her candy is such a big motivator. It keeps her legs moving. We had to make one precarious crossing of a small creek. Natalie was nervous about it. She accidentally stepped in the creek, soaking her winter boots. Now I was really worried about her having a meltdown. Cold wet feet and still many kilometers to get back home. The sun was behind the mountains now and it was gradually getting darker. 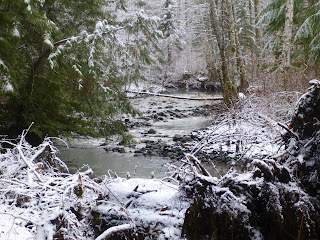 We were getting along the road lost in thought and I saw a movement out of the corner of my eye. I looked to see the dark fur of a deer standing on the ridge above us. Instantly I hollered for Marshall. Too late, he saw the deer as well. He bounded away up the hill to give chase. I started yelling all my commands. "Here Marshall, Lets go, whats this..." as loud as I could. Natalie didn't realize what happened because she didn't see the deer. She said all she saw was my face getting redder from the yelling. Marshall poked his head back over the top of the hill to see where we were, and took off again. Still yelling, I picked up a stick to try to entice him back. After a couple of minutes he came rushing down to us, eyes on the stick. He was back. I leashed him briefly and he didn't give a second thought to that deer. I was scared that he was gone for good. In the four years I have been hiking in Cumberland, at least once a week, that was the first deer I had ever seen.

Before we got home it started snowing a little bit. We stopped to catch snowflakes in our mouths. Upon entering the front door I check iPhone. I clocked 7.6k with the Cyclometer app. That is the longest walk I had ever taken Natalie on. I was elated that she made it since I was pretty tuckered out by the end. It gave me hope that I will be able to bring her on longer and harder hikes in the months to come.
Posted by Blayne Prowse at 8:26 PM