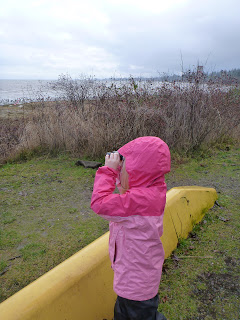 Today we ventured out to the estuary of the Courtenay River for our weekly adventure. I had been wanting to bring Natalie along with me on a birdwatching expedition, and this place is a fantastic spot to spy on waterfowl, song birds, sea gulls, eagles as well as seals, and peoples cute dogs. 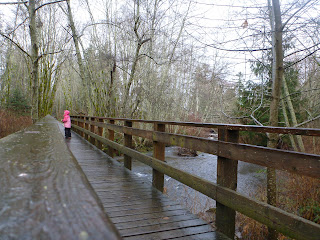 We started off at the south end of the Courtenay Riverwalk, off Millard road. The Riverwalk (also called the Airpark) is a 3.5 kilometer paved path that follows along the banks of the Courtenay River and the estuary. There is a lagoon and an airpark for citizens with small propeller planes. The path starts downtown at 5th street on the north end and is paved all the way to 31st street at the south. From 31st street the trail turns to crushed gravel and boardwalk.This pathway meanders through the Millard Conservation Area managed by the Natures Trust B.C. Included along the route is a popular kayak launch and freshwater marina, a small coffee shop, a really great modern playground for kids, and numerous benches and viewing platforms. It is very popular with walkers, runners, cyclists and rollerbladers. I use this path often when cycling to get from one end of town to the other, while avoiding cars. Unfortunately for me, it seems as though it would be quicker to deal with the auto traffic. Pedestrians can be really heavy on this route. 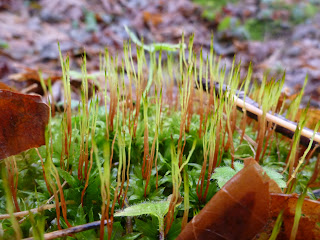 Natalie and I donned our new Marmot rain gear and our binoculars, tossed a bag of pistachio nuts in my pocket and wandered off. We began by having a peek at the hundreds of American Widgeon and Mallard ducks bobbing in the surf. I also spotted a couple of Northern Pintail drakes in amongst the others. I was hoping to spy a Teal, but they proved elusive. It was really windy at this spot so we decided to carry onto the wooded path. The mixed forest of Red Alder, Bigleaf Maple, Grand Fir and Cottonwood. We also saw numerous Snowberries, which are very poisonous. The pretty Millard creek is an important urban fish bearing creek, which has Coho, Chum and Cutthroat trout. It flows down through the upland farms and light urban development, merges with Piercy Creek and flow out into the estuary. A streamkeeper group has been working to enhance the creek and the fish populations. 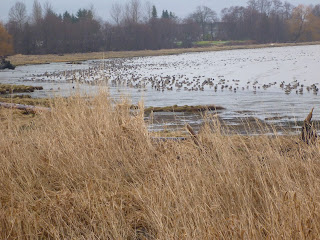 We managed to identify several more species on the walk, including a few spotted Towhee, a Northern Goshawk, a pair of Ravens and some little Bushtits. Natalie had a hard time picking up detail in the birds with her binoculars. She didn't get a chance to learn to much about them today, but we did use the iBird Canada app on my iPhone to verify the identity of some of the sightings. There were literally thousands of ducks in the estuary today. It was incredible. We did play the "name this tree" game while we walked and Natalie was able to remember what the Red Alder and Bigleaf Maple were. I hope she remembers these things that I teach her. I find this kind of knowledge very cool, and to be able to have this as she ages may help her in deciding future areas of study, either for profession or hobby. We finished the adventure by telling jokes on the walk back to the car, laughing and teasing each other. Some of the jokes I made up were terrible, but they made her laugh non the less. 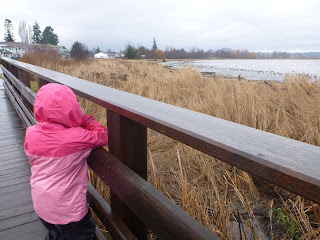 I was a fun little trip, we got to try out our new rain gear and I was able to introduce Natalie to a new kind of "hunting" Find adventure everyone!

Posted by Blayne Prowse at 4:37 PM