I was up early again. For some reason I was having a hard time sleeping in the tent. It was really close quarters compared to sleeping in a king sized bed. After such a huge day, I just wasn't tired. I guess the anticipation of town food was enough to get me up. I spent an hour watching the lake, reading a newspaper, and drinking coffee. It was unbelievably quiet, and serene. The only noise I heard were the buzzing mosquitoes.

My tent mate woke up, we ate breakfast and packed up. The other couple were still in there tent when we rolled out. I was feeling for them. What a day they will have. It felt really good to be almost done the "hard work" portion of the vacation. My rear end was so painful, sitting on the seat was torture. Hoping to beat the headwind by starting early backfired, and soon we were pushing into it again as we followed the Chilkat river, home of the famous bald eagle gatherings in late fall. No fish in the river yet, so no bears and few eagle. The river was picturesque, it would be really neat to watch the bears and eagles fish this river in the appropriate season. There were some nice interpretative spots to stop and learn about bald eagles.

It was a long 40k into Haines. We rode right up main street and headed for the visitor info center. Getting out of my cycling clothes was heaven. We asked at the info where to get good fish and chips, and they sent us to the Lighthouse restaurant down by the marina. And who did we run into at the info center but Urse and Chris. Freshly showered, fed and happy as could be. There were loving life. We had a quick visit then had to vamoose to get some food, so we reluctantly got back in the saddle and rolled down the steep hill to the marina and the restaurant.

The food was excellent, ceasar salad, fish and chips, chocolate cake and a couple of Cokes. Re-fueling always makes me feel much better, and we had gotten some vague directions to our friends place where we would be staying. First we went up the street to the Rusty Compass for an iced americano. Life was great, but too soon back on the bike for the 3k ride out to our home away from home, american style.

Haines in a nice little community. You sure know you are in America. The stores, banks, the way people are, things are just different than Canada. For being so close to Canada, it is so different. The residents were nothing less than super friendly, really happy and welcoming.

We managed to find home, and were a surprise, since we weren't expected until the following day. We had a good visit and a shower, then whisked away to go for dinner. All-you-can-eat tacos at the Elks club. OMG it was the best meal on the trip. I was still feeling famished and I had 8 tacos, I could hardly move, but it was worth every bit of discomfort.

Back at the house we were escorted down the hill to our accommodation. A little bungalow on the beach, paradise. We all stayed down on the beach watching the eagles play and the cruise ships until we got tired and hit the hay in the sweet little cabin on the shores of Lynn Canal. 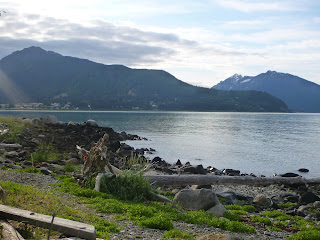 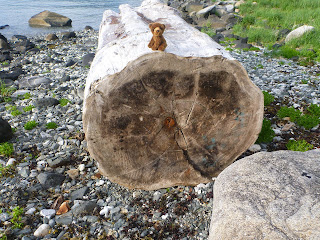 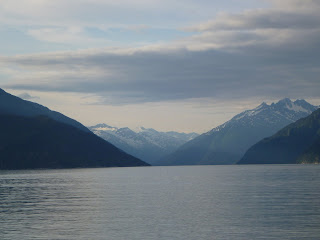 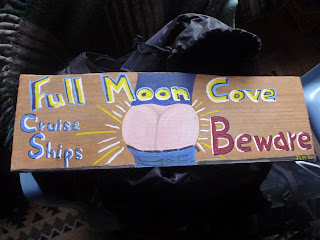 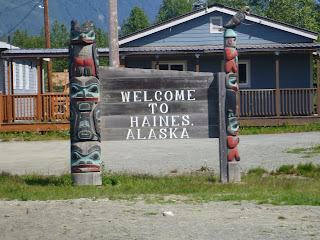 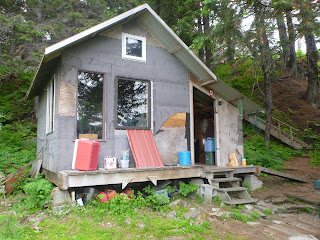 Posted by Blayne Prowse at 9:55 PM