It was an early start this morning. The anticipation of the big day had me up early. I went to the river for water, and got the pot on to boil for breakfast. Hot tea on granola. So yummy. Camp was packed and we were on the road by 8.

The first three quarters of the day went like this. Climbing, rainy, head wind, frustration, cold. We left Yukon after about three hours into the day, and back in BC, for a couple of hours, before Alaska. We stopped and had a snack behind some bushes on the side of the road to get out of the wind. It was a nice break, although far to short, and soon we were back out in the bitting cold wind. The sun would come out and tease us just a little, it would start to warm up, then more wind and misty rain. It wasn't coastal B.C. rain, it was still wet and cold. Tatshenshini/Alsek Provincial Park is a tough piece of Canada.

Lunch break was at Mule Creek. There is some kind of a maitenance building there with an outhouse and a trash can. And the building was a giant wind break. Perfect opportunity for a quick nap and a hot lunch. We stopped to check out a small cabin just off the road. It would have been a good spot to camp if it was later in the day. I wasn't ready to stop yet, it was only 2. We kept going. There was some snow in the ditch that we paused at to sit on to calm the saddle sores. It was painful but it helped so much. Numb bum.

Finally by around 3 P.M. we made it to the Haines Highway Summit. At 1070 meters is the highest point on the road. It was time to celebrate. We talked to a family at the summit and they told us there was more hills ahead. Party over. We descended quickly down to a river bottom, and had a huge climb to get up to the Three Guardsman Summit. This was an epic climb, so done with going up, needing a break. The Guardsman mountains were so close, and so tall. The highest peak is over 6000ft, and it looked like it was right there. So impressive. Awe inspiring.

Finally we hit the top again, this time for real. The highway dropped away in front of us. A quick three kilometer drop brought us to another point of interest. The sign showed the elevation drop. We would be going from around 1000m to sea level in 30k. It was the most intense down hill I have ever encountered. We went from alpine, no trees, just rocks and lichens, to large hemlock and spruce, cotton wood, and the ocean smell in about half an hour. The gusting head wind was scary feeling. It felt like the wind was acting as a brake. We did good at keeping the bike at about 30 kph. I am sure my brakes had some major wear on them by the time we hit the Alaska border.

The border sure was less intense than where I have gone through before down south. There is one place to drive through, one guard, and a small little building. The Canadian Customs was even smaller, and rustic looking. A nice border guard "let" us into the country, asked some questions and played tour guide. He tried to help us find a campsite. It was getting late in the day. I think it was after 5 by the time we went through the border. I was nervous about wild camping in the U.S. I didn't want to trespass, and there is no way to tell out in the rural area.

The head wind didn't let up, and we were riding with all we had left. It was 70k from the border to Haines, too far after a huge day like this, but we need to find some where to sleep. The k's(or miles) were going slow, my rear end was in pain, I was hungry and tired, but had to keep on going. Finally we came to a road, Mosquito Lake Rd. The talkative tourer in Haines Junction had mentioned a campsite at Mosquito Lake, so we turned down for a look. A couple of locals we saw on the road confirmed the campsite. It was about 5k to the site, and that was about all we could take. We slowly rode into the empty site, at about 7, to find two other bike tourers there, setting up camp. They were headed to Dawson City. They had to ride up the big hill we just came down. Although I was feeling for them, their spirits were high, and were excited about it. It could have been the micro-brew they had enjoyed upon arriving in Haines. It was nice to talk to some other cyclists, and ones that were full of energy, since we were completely done. It was a good night. The weather was getting better.

Unfortunately my camera battery ran out of juice during the day, so I don't have many pictures of the later part of the day, they are on my girlfriends camera. We ended up riding 120k this day, 70 of it was up hill. We crossed two borders. Cycled across the province of B.C., well just a skinny northern part. The most remote part. There are no towns in this part of B.C., not really any dwellings, just a few cabins. Tomorrow we would be in town, hot shower, greasy food, and coca cola. I can't wait. 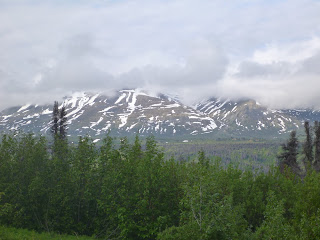 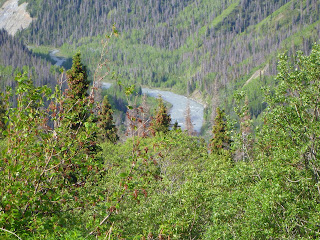 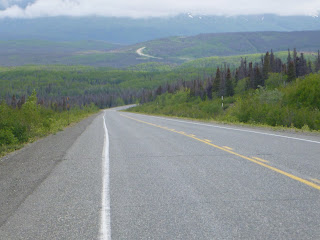 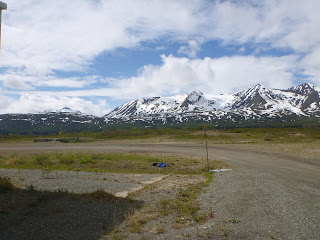 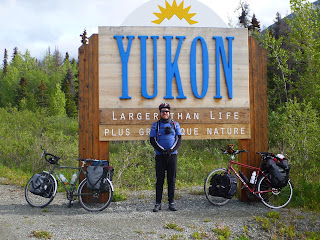 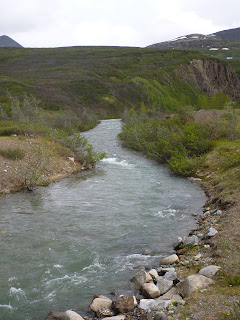 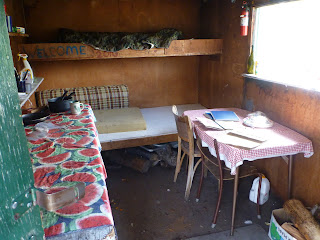 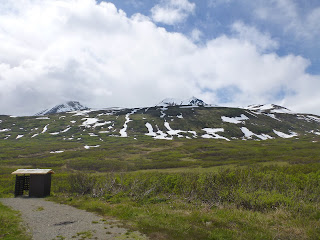 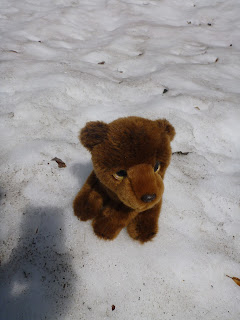 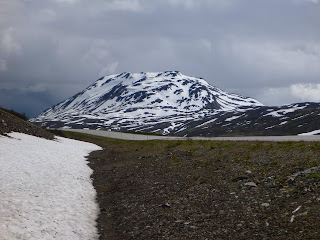 Posted by Blayne Prowse at 9:32 PM