I woke up around 4 in the morning, looked outside, and I was sure there was snow in the ground out in front of the cabin. So glad that the cabin won the debate. It was raining hard all night. A leisurely morning was incredible, as was breakfast in the lodge. Hot eggs and hashbrowns, plus lots of coffee. I was a happy traveler.

The asphalt continued to be smooth and wonderful. The first 10k went really well. Suddenly as we hit Dezadeash Lake, and the head wind got unbelievably strong. It felt like it was hard to control the bike, and it got really cold. Full rain gear was a must. After we got away from the main body of the lake, the wind dropped a little bit, but it was still so cold. . It was really stressful with the wind, and another guest at the lodge said there were numerous bear sightings the day before during the race. I was so jumpy. A squirrel ran across the road in front of me and I startled. It might as well have been a grizzly by the way I reacted. Speaking loudly and whistle blowing were our way of warning bears we were coming. We stopped around 30k to have a lunch break.

The climbing started almost right after the break. It was 15k of gradual climbing, nothing too steep, just long. Some hills were over a kilometer long. My backside was really giving me trouble. It hurt to be on the saddle. I was a bit worried about two more days of this. The fear of bears started to go away gradually, and by the time we hit the Tatshenshini river lookout, I was calm and feeling good. We stopped for a break. 8 French Canadian tourists were also at the rest stop, taking pictures. I was trying to talk to one, finding out where Million Dollar Falls is, when I could see a bear run out on the road about 200 meters away. Me and the other guys run towards the road to get a closer look, then two more bears came out of the bush and on to the road, then back again. The first one crossed the road and went into the bush adjacent to us. At first it appeared that the bears were grizzly, because they were brown, but upon further investigation I realized they were brown phase black bears. I was stoked. I went up on the viewing platform to watch the bear. He was slowly grazing his way towards me. However he never got closer than about 70 meters. My girlfriend was nervous about the bear, so I decided to leave with her. A couple of big whistle blows and we were down a big hill and right to the Million Dollar falls turn off.

Million Dollar falls is a nice campsite. It has firewood, pits, and picnic tables. It was nearly empty. We decided to stay close to another occupied campsite, to ease worries about more bears. I went off to find an axe from them, and got a chance to chit chat. I got the lowdown on the next day. It will be a big one. 17k of climbing right off the bat, and its about 70k to the summit. Okay, we can do this. It was good to be off the bike early to rest up for tomorrow. I split up a bunch of wood for a fire, and came back to camp set up and dinner being cooked. I am a lucky guy!

Dinner was noodles and soup mix with some diced veggies in it. Lots of salt and the fresh lightly cooked veggies was fantastic. The whole pot was emptied in short order. We went to the river to pump water for tomorrow and for breakfast. Tea and coffee was a nice treat for after dinner. We walked to the falls, which is really impressive. Not very high, but so much water running down it. The Yukon parks have done a nice job of building a elevated viewing platform along the banks of the Takahanne river to view the falls. Back at camp we spend almost an hour trying to get this damp spruce wood to light. It is terrible firewood. Finally after tearing a bunch of dead limbs off another spruce were we able to get the fire going. It got going really well just about the time it was time to go to sleep. It was nice while it lasted, and I left a lot of wood for the next folks who camp here. Sleep was nice, it was dry, and I felt safe here. 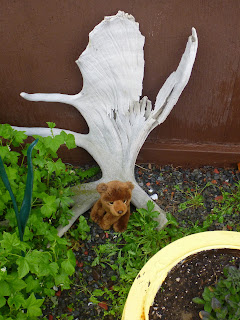 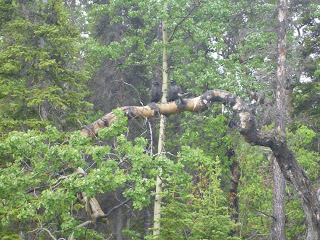 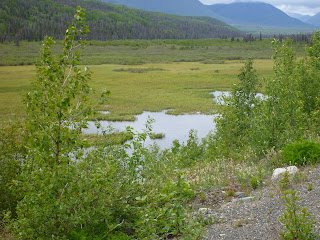 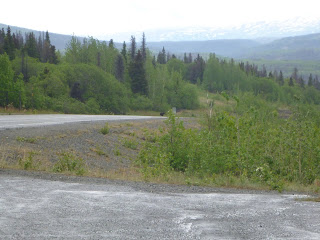 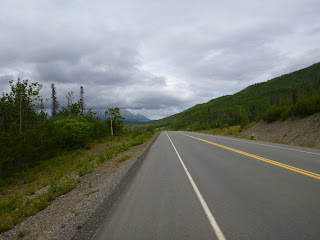 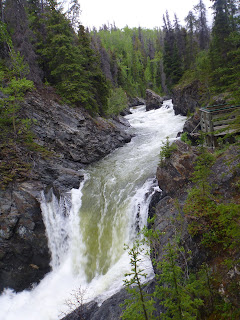 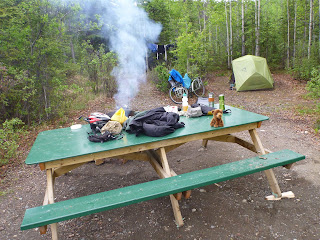 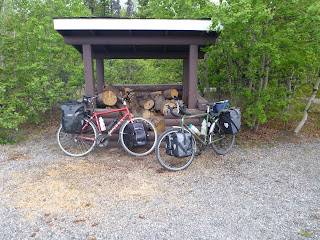 Posted by Blayne Prowse at 9:15 PM