Back from the north country 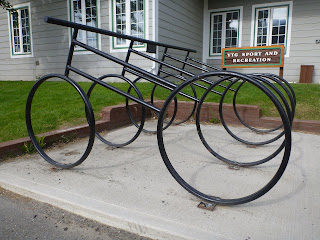 I got home yesterday from 18 great days away. That was the longest I have ever been away from home, and it was fantastic. I have never felt I had the time or finances to a trip like this, and now that it happened, I feel like it isn't that hard and it will be done again.

I will be writing entry's for each day, or group of days, in this blog. I could just write one really long account of what happened, but that could be kind of hard to follow. Stay tuned to this as I go along. I will include pictures as well.

I was quite surprised with the numbers of cyclists on the trip that we encountered. We met on fellow from Sweden who was touring from Anchorage, Alaska, down to San Diego. There were Chris and Urse from Switzerland who were going from Anchorage to Cancun, Mexico. Chris had already ridden from Patagonia on the southern tip of South America, to Cancun. He had cycled 30,000k in the past three years. Incredible. We met several other tourers along the way who were doing shorter trips, and all had stories, questions and advice in our interactions.

I was able to spend my first night in a hostel at this place in Whitehorse, called the Beez Kneez Backpacker Hostel. That was really cool. There were German and French people there, and it was cool to listen to them speak to each other, and to interact with them. We had a little garden shed sized cabin out in the year, just big enough for a double bed and our gear. What fun. I would recommend this place if going to Whitehorse, and you need accommodation.

I found out about days of headwind, mosquitoes, broken down bike, rain, loooong straight stretches of road, and how such a northern community, with nearly the same population as Courtenay, can have FAR superior bicycling infrastructure. There are cycling lanes all around the city, a separate trail going up beside a steep, busy main road(the trail has level spots to break to catch your breath as you go up. Nice touch), funky bike racks and bike lockers in and around the city. There were people all over the place riding on two wheels. There were lots of commuters, and pleasure riders. I never felt worried about the vehicle traffic while we were  moving about like the lost tourists that we were. This is a town that has freezing temperatures from October until March, snow and long dark winter days. It has better cycling that a city that has one of the best climates in North American. Something is wrong with this picture.

Stay tuned for more about my trip. I am excited to share it with you all. Re-happy.
Posted by Blayne Prowse at 8:04 PM