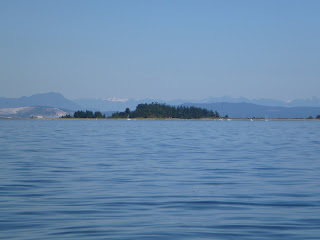 I had a strong look back at my youth today. I took Natalie down to a beach in front of the house where I lived part time until I was 5. It is down Dorothy road in Union Bay (the road is named after my Nana). My Grandpa and Nana also lived down there for years. I spent hours and hours on this beach as a youngster. There are so many memories. The rock, the pilings, the view. We swam and played in the water, on the rock piles that were cleared many moons ago to make for better swimming and boat landing. The water was warm and the air was still. The beach was void of people and was silent, except for Natalie hollering. She hasn't learned that I can hear really well, especially when she is right beside me. My Grandparents house sure looks different than in did fifteen years ago when my Grandpa sold it. The big old Alder that my Nana's ashes were buried under is gone, and I wonder what happened to them? I hope they were found and treated with respect. It kind of make me sad to think about that. I wonder if my family knows or not. Down at the beach I took Natalie for a walk in front of where our trailer once sat. At once I found the large boulder that was, as a 5 year old, my throne. It has a perfect little nook in it for sitting. I sat down on that rock, and it still felt good, maybe better. I remembered being on this beach with my sister. She was terrified of crabs and I remember the first time she was pinched on the finger by one and screamed bloody murder. I remember my Dad's cousins kids rowing our old tin boat out in front of the house and gaffing a salmon that was doing a weird flopping on the surface. We ate it for dinner with no ill effects. I can only imagine what was going on with that fish. I remember when a teenage girl almost drown on the neighbors beach. She suffered from cramps and I can still picture her trashing around in the water. I could see myself learning to ride my first bike on this property, and going to the beach with some older kids and throwing rocks skyward at dusk to entice bats to show themselves. And when my dad, who had too many stubbie bottles of Lucky had a mis-step and sprained his ankle on the stairs coming out of the trailer. Later, after we moved out my uncle moved into that mobile. I can still picture when they had to replace the septic tank, and the weird colors inside of it. I had no idea what it was at the time. I remember sleep overs there when my folks were away and Christmas dinner and fondue parties in that small place. I don't know how we all fit. Some years later once I was graduated high school my dads friend lived on the property. The single wide was long gone, sold off, and now he had a large fifth wheel parked on the pad. My dad and I paid a visit to him one day and we sat and polished off a bunch of cans of  luke-warm beer. I felt pretty cool sitting there with the "old" guys, day drinking in the sun. I remember getting pretty buzzed. A decade later it was down on this beach were I caught my first coho salmon on the fly. At the time it was a pretty huge event for someone as absorbed into fly fishing. The vision of that chrome bullet chasing and engulfing my Mickey Finn fly is etched in my mind for eternity. This small stretch of Baynes Sound has such a huge part of my youth revolving around it. It is easy to forget until you take your child there and begin to speak about what happened and your memories. 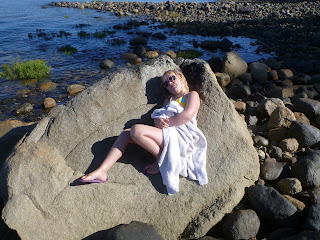 The second relapse I had to day was thanks to YouTube. We had just finished watching a Netflix movie and while I still had my computer plugged in to the HDMI it seemed like the right thing to do by bringing up some old music videos. Natalie has been listening to "The 90's on 9" with me for a few months on the Sirius in the Element, so she knows many songs from the era. I started out with "Baby got Back" and just ran through them all. MC Hammer, Vanilla Ice, House of Pain, Run DMC all the greats from late 80's and early 90's. She was loving it, and she even thanked me as I tucked her in, for showing her these old video's. I think it is so cool that we can find damn near any old song we could want to listen to from our childhoods on the Interweb. To be able to show the next generation what life was like when I was young is priceless. I could only imagine what it was like when my father was young, looking at pictures of cars and watching historical movies, like "Dazed and Confused" and such films for a glimpse of his past. We have a richness of history at our finger tips. That is so crucial for our young people to never allow such crap like MC Hammer pants, and Vanilla Ice's terrible haircuts to EVER make a comeback. But in all honesty to be able to show her things like the old cartoons we watched, and toys we played with is so fun for us both.
It has been in my mind for quite sometime about how old we are all getting. Not old in a boring way, but in a birthday kind of way. My dad went up to the North Island today to visit my uncle. He is getting really close to turning 70. He is probably only a year away. My dad will be 67 this year. It is freaking me out a bit. No one seems to get physically older, because it is a gradual transition. Once one looks at the number of birthdays it becomes clear that it is happening. My Grandpa is getting close to 90, I am creeping on my mid 30's and is won't be long until my daughter is 10. I am not bemoaning the fact that we all get older and I, in fact, like being the age I am and don't wish for a second to be a teenager or young adult again. School, puberty, and all that goes with it is something that I never wish on anyone to go through again.
Well the years go one, and the words keep coming out of my fingers. I am canning peaches tomorrow morning. Reminds me of another song from back in the day......Peaches come from a can, they were put there by a man........
Re-Happy
Posted by Blayne Prowse at 10:20 PM