So the cabin on the ferry didn't work as well as we had hoped. Hecate Strait was violent. The boat was rolling and crashing. I just couldn't relax enough to fall asleep. It was pretty horrible way to spend a night. I guess I finally did drift off for a little while, because the phone rang at 4:15 and woke me up. The wake up call was so we could be ready to get off the boat for 5. Quickly dressing and going upstairs for free coffee and pasteries. I was feeling pretty rough from not sleeping. We went down to the bike and loaded our stuff on. We saw Christina and she said it was so scary up on the passenger deck. She thought we were all going to die. Wow. I was happy we had the cabin after all. Just really glad that we were back on land, if for only an hour.

Soon we were loading on the MV Northen Expedition. to bring us south. The bikes were fastened and we went upstairs to find somewhere to sit. The boat was a little bit messed up. The forward passenger deck was only accessible if you were to pay something like $30. So we had to sit on the side seats, which was okay. The windows were floor to ceiling and directly on the edge. An uninterrupted view. It worked out well because the channels that we cruised were quite narrow so we could see the shore really well.

I had to crash out as soon as we were situated. I was exhausted and still feeling horrible. I napped for a while and woke up feeling a little better. We went for breakfast in the fancy buffet restaurant. It was pretty good. I consumed a bunch of coffee and smoked pork products. I was feeling a lot better afterwards. The day was spent sitting, reading, and watching the world go by. I was feeling kind of grumpy. I just wanted to be quiet and not talk. Just lose myself in a book.

The scenery was spectacular. Waterfall Alley was really sweet. On both sides of the boat one could see waterfalls cascading down the cliffs, rivers just appearing out of the forest, and small rivulets seeping from every where. A very wet area of the coast. The snow was also not very high up on the mountains here either. Unfortunately I saw no bears or sheep. I did see six different pods of Pacific White-side Dolphins. Orcas were spotted once on the other side of the boat, and I did see another kind of whale spout, but didn't see the critter behind it. The day was pretty nice. It was mixed sun and cloud, no rain. The water was calm except when we had to cross open water. The roll was pretty strong and made some feel a little sea sick. I was doing fine, but it was hard to walk. 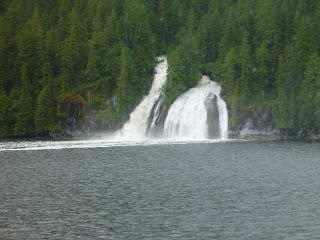 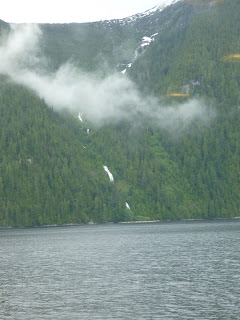 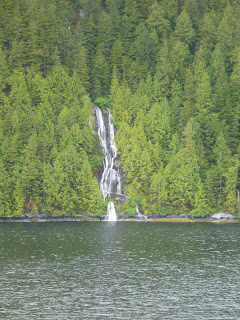 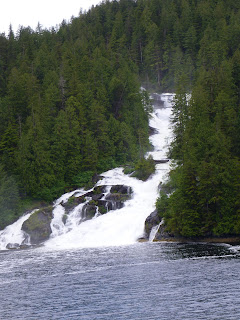 Waterfall at the cannery 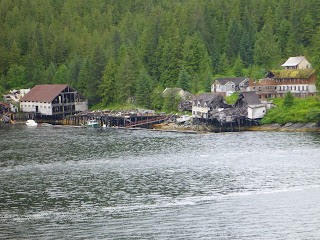 An old cannery that is being restored 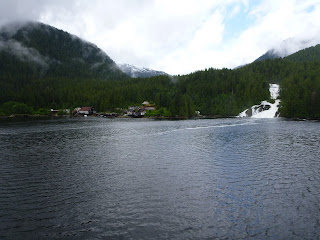 Panned out view of cannery and waterfall 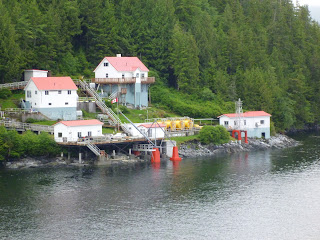 
We docked in Port Hardy at 10 p.m. It was basically dark. We met up with Christina at the terminal and made a plan to travel to a campsite together. We allowed the vehicle traffic to leave the area first. We had between us two head lamps and three rear blinkies. Luckily it was raining a little and we had our reflective rain jackets on. I wish I had a picture of our caravan heading down an unfamiliar road in the pitch black. It was fun, if not a little scary. Traffic was very light, luckily. We rode about 3k and found the Wildwoods campsite. The campsite was a little rough but it was cheap and close. Setting up the tent was tough to do with only one head lamp, but we did it and were soon in bed.

I awoke early and was up and ready to get moving, much to the dismay of my travelling partner. We broke camp, ate a bagel and a banana, and got moving. The ride to Port McNeil was nice, aside from the saddle sores.. Traffic was almost non-existent, no large hills to speak of and the pavement was in very good shape. We made it to Port McNeil about 10 minutes before my sister, who had driven up from Courtenay to pick us up. We loaded and drove down to the Gus Pub for lunch. I was disappointed that they had taken the Pig Wings off the menu. Sad, they were awesome. After lunch we popped into the coffee shop and found Christina there, who was having breakfast. We chatted and gave her a few pointers on the north island. We bid her farewell and in a couple hours we were home, and the greatest adventure of my life was complete.
Posted by Blayne Prowse at 8:46 PM