Canada Day. Our last day on the island was a little somber. I really wasn't looking forward to leaving this place, getting home, back to reality. I was missing Natalie who was on a trip of her own to Edmonton with her Grandma and cousins, and missing Marshall too, of course. He spent the whole time home with my dad getting spoiled with bones and dog treats. 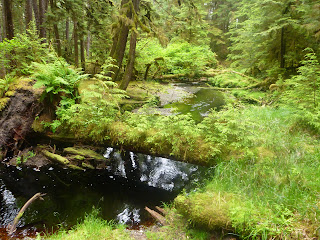 The adventure for the day was to once again drive back toward Tlell and hike to the shipwreck "Pesuta" a 264' log barge that hit the beach back in 1928. It is a 5 km round trip hike. The first section is through a beautiful forest, and it is located in Naikoon Provincial Park. A nice single track trail meanders in amongst large spruce, cedar and hemlock trees as well as a perfect carpet of moss on the ground. The green is intense. I took pictures in black and white as well as color and the difference is shocking. All four of us made the trip, as well as Holly. She was proudly leading the way. The forest gives way to river and we descended the bank to the  mouth of the Tlell river. Nice looking water, with a big open bank. I dreamed of casting to coho into this river. Perfect spot to cast a fly. As we departed the shelter of the trees, the wind picked up and it was wild out there. It was the first windy day we experienced on Haida Gwaii, and the wind didn't disappoint. The waves crashing in from Hecate strait were pounding the shore with such force. The sand was blowing across the beach, making really neat patterns with the rocks and different colored sands. 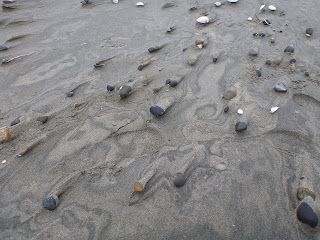 Patterns in the sand from the wind

Soon we were at the ship wreck. It was pretty impressive. The timbers that constructed the vessel were huge. The things they could build with the primitive equipment 90 years ago amazes me. Huge pieces of steel and wood still were intact, but all that was left was a section about 40 feet long. The power of Hecate Strait has broken her into a fragment of her former greatness. It was neat because the hull had filled up with sea foam. It was about a foot deep and kind of looked like snow. It was cool. We had to take off as the tide was quickly coming in, so we had to beat it. Walking into the wind proved much more difficult than coming with it. It was a tough walk. It was nice to have some un-distracted time to visit with out hosts as we powered into the howling south-easter. I did take time to stop and eat some sea asparagus. It is a tasty, salty beach treat that I had never tried before. I do believe that it grows locally in some of the sandy beaches. I will have to look around. Soon we were back at the river and a little shelter from the wind. 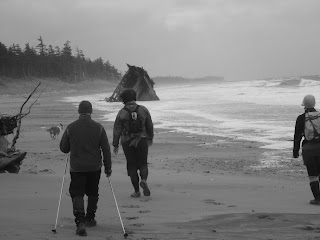 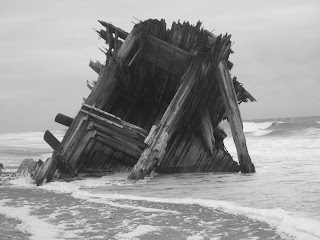 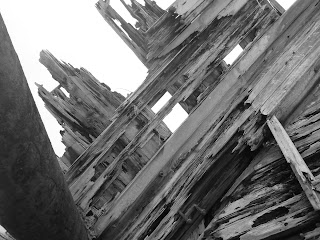 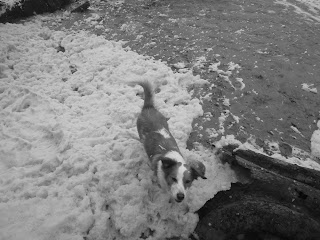 Holly on the sea foam 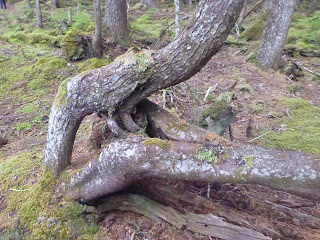 A playful river otter was in the water having a look at Holly. It would swim close, then dive down and swim away. Then come back in again. It was pretty cool. I had no idea how many introduced species are on the island. River otters are one. Deer, elk, beavers, rabbits, squirrels, and even cows. Naikoon Park also has feral cows that like to hang out in the area adjacent to the shipwreck. We didn't get to see them, but apparently they are around. The introduced species have taken a toll on the native plants and animals. All but impossible to change this balance now, and the damage is evident. The forests are void of any seedling trees, except for hemlock. The deer like to eat the cedar and spruce, as well as native crab apple. The crab apple is an important food species for the Haida, and it is in serious trouble because of the deer.

We got back to the car wind burned and damp. We drove back to the house to pack. Our ferry was leaving at 11 and we had to be there early. After packing we decided to go out for dinner. Charlotte City has a very small selection of restaurants, and being Canada Fay, it was even less. The main restaurant, with the best food, had a tour bus come in, so it was packed. We were turned away. The only other option was the Chinese food joint. It was just like a typical Chinese Canadian restaurant, with-out all the cheesy decor. The food was good and we were all stuffed.

Back to the house to load up. We were offered a ride to the ferry ,since it was raining, and gladly accepted. We bid farewell to Matt and Holly. Katie gave us a ride to the terminal. We assembled our gear on the bikes and said farewell to Katie. We checked in and were waiting to be allowed on the boat. In the line-up we met another cyclist named Christina. She had flown to Masset and toured around the island for a week, and now she was heading down to Port Hardy and riding back to Vancouver. We were getting a berth so we could sleep. The ferry would arrive in Prince Rupert at 5 a.m. and our wake up call would be at 4:30. We needed to have a good sleep. It was going to be a long couple of days.
Posted by Blayne Prowse at 9:33 PM