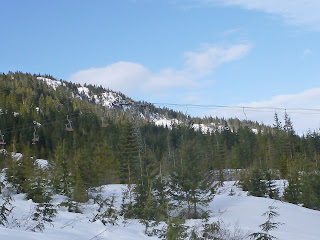 With the promise of beautiful, sunny weather we headed up to Forbidden Plateau early this morning, to beat the crowd and get home before the Super Bowl game. Shoeing on Forbidden has been on my list all season, but I was unsure where to go, and how busy it would be up there, and the condition of the road. Even with the B.F. Goodrich AT's on the Element, only having two wheel drive makes me nervous if the conditions are not ideal. To my surprise the road is in very good shape, with packed snow only starting near the top. It was well graveled today and we only hit one patch of ice that made the Element spin a tire. I took it slow and made it up with no problems. Surprisingly only three other cars were in the parking lot. Great. I love going places where there are very few people. 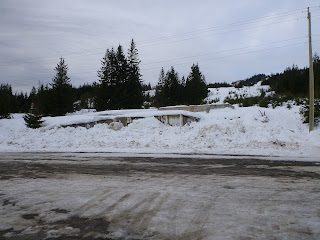 A cold breeze was blowing as we organized. Did we have warm enough clothes? That always passes through my mind when departing the heated vehicle and entering the environment. Of course soon we would be walking and body temperature would regulate. Dressed in proper layers, gloves and hats makes for a more comfortable trek. Merino base layers and mid layer and a wind and water-proof outer layer works perfectly. In fact once about half way up our trek, Natalie had to remove her hat because she was over heating. 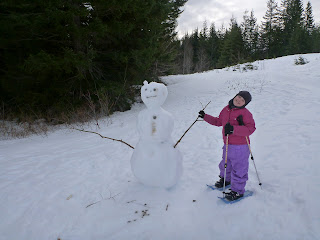 Someone built this nice "Frosty"

Forbidden Plateau was once a bustling ski hill. In the 20's, folks would hike up to ski Mt. Becher from Comox Lake in the winter, and a cabin was established. Over the years, a road was improved, a chair lift and a lodge were built and it was quite popular. Not as busy as Mt. Washington, but also didn't have the same quantity of snow. After a couple of seasons of very little snow, and not opening, the society that ran the hill decided to fold, running out of funds to keep operations open. Unfortunately, the lodge was burned to the ground in an arson around 1998, and since then there has been no attempt to re-open for commercial operations. The chairlifts still hang from the cables going to the top of the hill, as well as the t-bar lift. It is quite strange that nothing was dismantled. I guess it would have cost to much. The only symbol of the lodge is the concrete foundation at the parking lot. 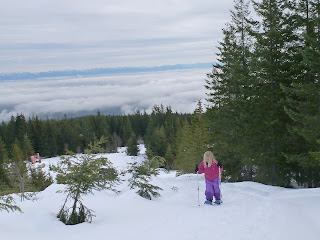 We began by climbing the first hill that brings one above the lodge foundation and followed an existing track that has been packed down by snowmobiles. We spent sometime playing on a small slope, Natalie sliding down on her backside. Then, with some bribing, convinced her to walk up a really big hill so we could have a view. Incredibly, she made it all the way. It was a steep climb to the top of the t-bar lift, gaining about 90 meters in 1.5 kilometers, but the majority of the ascent in about 500m. A big hill for a kid. She kept saying she was climbing a mountain and I had to agree. 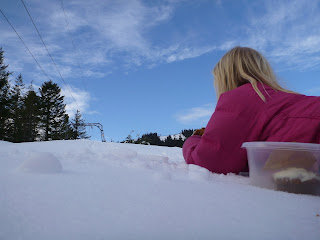 We stopped to eat when the terrain leveled off to enjoy the view of the Coast Mountains and the Comox Valley. We could not see the ocean because of a fog bank that had rolled in a few days ago. We investigated a small hut that we found as well as deciphered a sign that was so faded that it was hard to see what it said. We did have an argument and Natalie made me very frustrated. She was complaining about going further along the flat part of the trail, and the whole weekly adventure almost was cancelled. No matter what adventure we do, there is always a setback of some kind. Environmental issues are easy to solve by having the right equipment, but what happened today can't be solved with a MEC order. We had several discussions today to, hopefully, solve this and be able to get along happily with what ever adventure we undertake. 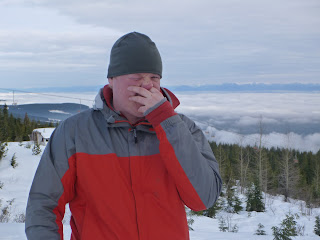 She wanted me to pose this way

Descending took no time. We jumped, slid, and laughed our way down to where we started from. Now there were many others enjoying the snow. Several family tobogganing, having bon fires and feeding the Whiskey Jacks. I was surprised that the little Grey Jays didn't bother us when we were eating our lunch. Once back in the car, some guy on a snowmobile decided to take it up the same path that everyone was using to access the trails. Inconsiderate and dangerous. I was happy that we were back, I would have been choked at him. 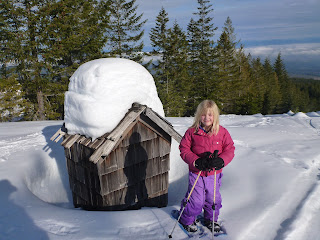 A little shed, a door was on the other side. Outhouse?


Forbidden Plateau is a great place for free family fun, either winter or summer. With sledding, snowshoeing, hiking, berry picking, mountain biking and sight seeing and only about 20 minutes from downtown Courtenay, a perfect place to find adventure. Go get it!
Posted by Blayne Prowse at 7:54 PM