Our adventure this week took us into deep Merville, down Tsolum River road, off of Headquarters road to a wonderful little spot that is relatively unknown by outsiders of the Comox Valley. Our options were many since the day was bright, albeit quite cold and windy, but the sun was out in full force with nary a cloud to be seen. We already had to be in Merville this morning, so the choice was quickly narrowed down.

Tsolum Spirit Park was created in the early nineties by the Area director from the Regional District and Tsolum Elementary students. Read the sign in this picture for the whole story.


The walk down to the river on the old railway grade is a short and flat route, easily accessible regardless of abilities. One short hill brings you out at river level to a hitching post and out house. Natalie decided that the hitching post was a balance beam and she tried to walk on it, with out success. She didn't fall, just couldn't get up on her feet. We made our way to the river and found Marshall already there in advance of us, front feet in the river waiting to swim. Brrr. I wish I had a dogs aversion to cold. We could see where Dove Creek flows into the Tsolum creating a confluence pool before the river shallows and creates a fast moving riffle.


The Tsolum River was once a great salmon stream. Like most of the rivers on the East Coast of Vancouver Island, it has been detrimentally effected by man. Logging, and agriculture have been a factor, but an abandoned open pit copper mine on Mt. Washington had the biggest impact. The leaching from the mine site  poisoned the water and killed the fish in the river. After 40 years of the leaching, the Tsolum River Restoration Society successfully lobbied the Ministry of Environment to cap the mine and seal the copper under a geomembrane. The copper levels have already reduced by 70% in two years and it is hoped that the salmon and trout will be able to re-build. My girlfriends dad is involved with the group and I need to volunteer. It would be great to have a river full of salmon again.

Marshall did go in swimming, and Natalie and I spent sometime breaking ice that was in small puddles close to the river. They were in beautiful sunburst patterns.

Shortly after arriving we had a close encounter with an immature Bald Eagle, it passed not more than twenty feet above our heads. We also saw another bird of prey, but was unable to identify it. Half a dozen beautiful Western Yew trees were well rooted on the bank of the river. I would love to see these with berries on them. We could see the Douglas Fir on the far bank that were not far from falling because of erosion, the roots exposed like scraggly white hairs. 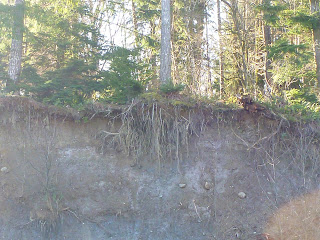 Natalie and I had a short, but fun adventure today to a place her and I hadn't been since she was very young. I hope to return in the summer when the heat will draw us into the water with Marshall. What a fantastic little spot, hidden away in the Comox Valley. Find Adventure.
Posted by Blayne Prowse at 7:04 PM