I believe it was last fall that an article appearing in the local newspaper. The subject was an announcement of a new park on Denman Island, called East Beach Park. This park is on the north end of Denman, in a large area that was logged a decade or two ago. A developer had purchased the land and was hoping to carve it into many separate lots, acreages of various sizes. The developer donated land to the Regional District to create this park, and a staircase was built to allow safer access to the shore below the Komas Bluffs on Denman, and an easy drop in for a hike to Tree Island. In reading this article, another adventure was spawned, before the adventure list was created.
Tree Island has a long history for me personally. As a child, some of my earliest memories include boating to Tree Island with my family. Back then it seemed like everyone in Union Bay had a boat and would cruise over on the weekends. We would randomly have large groups all hanging out in the sun, kids and dogs and grown-ups. I spent many hours snorkeling, digging in the sand, clamming, beach combing, batting rocks, and once getting a mean case of sunstroke. Tree Island was also where I learned to hunt ducks with my uncles. Many days we spent on the islands(the Seal Islets are part of Tree Island, and are called by the locals Shack and Protection) in the fall and winter harvesting mallard and American widgeon. This was my beginning of learning about waterfowl and a love for wildlife watching.
It was decided early this spring that Natalie and I would make the trip over and hike to Tree Island for an overnight camping trip. Hanna was invited along, and with Marshall leading the way we made a "Fantastic Four" of camping machines. We left Cumberland about 8am to catch what ever ferry we could. Low tide was at 12:45 and I wanted to be well on our way before then walking the beach, as I was unsure how long it would take to walk, with the distance not being exactly known. I had pre-scouted the location of the trail head on a previous visit to the Island, so locating it would not be a problem, wasting precious time. We parked and shouldered packs that were pretty heavy. Unfortunately Tree Island has no fresh water so we had to pack it all in. I brought 12 liters, which was probably just enough, we could have used more. Marshall had his own pack on, to shoulder the load of his water and food, plus some of our stuff.
The hike ended up being about 3.5 kilometers from the parking lot to our campsite on Tree Island. We scored a beautiful spot close to the outhouse, and a couple nice Douglas fir tree with hammocks that someone had hung in them. The walk over was pretty warm so we wanted to get in the water asap. I instructed Natalie and Hanna on how to set up their tent, and with little help from me, the shelter was up and beds were made. It was remarkable how they could work together to finish the task. When they would say "We can't" I would tell them to figure it out. Kids give up much too fast when something gives them a little difficulty. The persevered and soon we were swimming. I had my snorkel on and determined to find a crab that was big enough to eat. Hanna bailed right in the water and was quickly in the deep water with her snorkel and fins, floating along with a life jacket. Natalie was having technical difficulties with her mask and finally gave up on it. Before I had a chance to look around much, Hanna was already cold so they went in. I went back and forth through the eel grass looking for a good eating size crab. I took pictures of some smaller ones and lots of starfish and sea stars. Suddenly, I spotted a big one, I mean huge. It would be a great meal for the three of us. I got excited, swam myself around for the perfect angle to snatch him from the grass. Down I go, and give it a poke. Nothing. Ah man, it was dead. That was very disappointed. I kept trying for a little while more then decided to check on the crew, so called it an incomplete mission to attempt again. 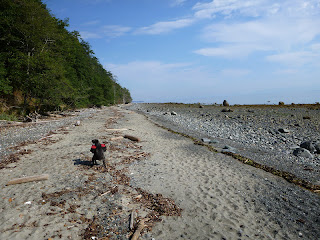 It was time to eat. Hunger had set in, so we munched on some smoked salmon, the last from 2011, and cheese. Energized we decided to try our hand at clamming. We hiked across the island to the mud flat between Protection and Tree Island to find some manila clams. The other side of the island all I could find were sand dollars and varnish clams. We cooked some varnish clams and they seemed spawny and not very palatable. We loaded up on manila clams. It was so easy, just raking my fingers through the mud pulled up two or three everytime. This was the clamming I remember as a youth! I pulled them up and tossed them to Natalie and Hanna, who scoped them into their containers. In the end we ate my one liter camping pot full of clams 4 times. What a feed. Natalie told me she didn't like clams, but fresh and boiled in sea water, she was in love with them. That made me happy to say the least. A wild foraged snack, how cool.
The rest of the afternoon I lazed in a hammock while Natalie and Hanna talked and sang songs. I was allowed to read a book and doze briefly before realizing that Marshall had wandered off. He wasn't far, but that was it for my little snooze. Originally my plan was to sleep on the beach like I had done at Raft Cove, but the weather forecast for a possible shower convinced me to raise my tent. With Hanna's help my very little cottage was erected and my bed made. As dusk settled in it was time for bed. The day trippers had all left for ports unknown, mostly Union Bay and Comox. I was sleepy and the girls were too. I stopped hearing them after about fifteen minutes and went out shortly after.
I was awoken around 1:30 am with Marshall growling and woofing at something. Telling him to be quiet as he was sleeping right beside me. I left the door of my tent open so he could be close. He will not sleep outside without company, and he wasn't about to come in my tiny shack. He continued growling quietly in his throat, I couldn't sleep. Damn dog. What could be be getting worked up for. I must have drifted off again and suddenly he was up and full out barking. I scrambled out of my tent, searching frantically for my headlamp. I have never heard of a bear on the island before, nothing else has made him this loud before at night. I shine my light at the beach. A single refection back. Light blue in color. What the heck? Too big to be a bird, absolutely not a bear. Alien? Sasquatch? Giant duck? Zombie? Nope, I turned off the light and I could just make out a form. It was a common critter that does exactly what we did to access Tree Island. It was a Black Tailed Deer. They cross the land bridge between the two islands on a regular basis to feed on the grass and sea asparagus. I could hear his hooves clicking on the rocks, and that was probably what set Marshall off. I got back in the tent, Marshall was still on edge for quite sometime and I didn't sleep all that well after wards. Of course the kids didn't hear a thing.
We packed up rather early in the morning. The skies didn't rain on us over night, but the wind was picking up and the clouds ominous, and I wanted the tents packed up before they potentially could get soaked. We ate breakfast of homemade granola soaked in tea(that the kids didn't appreciate) and I had some terrible coffee. It was a tough morning on me, and the kids were really good helping to get ready. At ten I announced that we were going for it. I could see land forming between the islands as the tide receded, so we would be good to go.
The hike out was pretty good, no problem getting across at all. I offered to carry Natalie's backpack about a third of the way to help speed her up so we could get back to the car. Hanna was keeping up with me even with her pack on, and Natalie empty couldn't. She just doesn't move fast. Maybe if she was with Hanna's family the roles would reverse, I don't know. But we made it back, up all 114 stairs to the car. We were almost perfectly in time for the ferry and a much deserved coffee for me and an ice cream for the kids.
Introducing Natalie to Tree Island camping was fulfilling for me. I really like to incorporate adventures that I had as a child into ours, it lets me re-live a little of my past and build tradition and memories for her to share along in her future. Find Adventure.
Posted by Blayne Prowse at 8:11 PM