It was an overcast, cool June morning in Prince Rupert as we rolled out of the hotel. A continental breakfast was offered and we filled up on bagels and yogurt. Nice start to the day. A quick ride out of town had us at the ferry terminal an hour early and waiting to cross Hecate Strait. Soon we were aboard the vessel, and instructed to tie our bikes against the wall of the car deck. I guess it gets pretty hairy out in the strait. We found some nice chairs up on the deck and settled in with books and coffee. We brought food from PR, so we didn't need to eat on the ferry. The sandwiches were excellent, and I got free coffee. The ferry employees on the northern routes are very nice. What a difference from the southern routes. After seven hours, and a rare calm day across the straight, we docked in Skidegate at 6 pm.

One of our hosts, Katie, was at the terminal waiting to accompany us back to her house in Queen Charlotte City. She was on her road bike so we traveled the few kilometers into QCC. It was so cool to finally be here. After all these years, here I was. We settled in, had a sockeye dinner, and spent a few hours talking. It was nice to have a home base for a few days.

The next morning Katie had to work, so Matt would be our tour guide. His plan was to take us to Yakoun Lake on a hike, then go out to East Beach to go crabbing. I couldn't have been happier. Crab is probably my favorite thing to eat. The Yakoun lake trail was accessed by a half hour drive down a logging road. We were stopped and warned by a forestry worker that a logging truck was coming. We stopped and waited, and a "fat truck" off highway logging truck loaded came barreling down the road. It was fortunate that we had warning about that one!

The hike to Yakoun lake is about 40 minutes down a maintained trail. Huge spruce trees were throughout the forest as well as some impressive red cedar and yew. The lake was very nice. No clear cuts were visible from the shores, and the snowcapped mountains were across from it. I played with my new friend Holly, the family dog. She is a sweet little girl. I threw sticks for her in the water, we chased ravens together, and she watched me carve a walking stick. It was a nice quiet place to have some downtime. Soon we had to leave so we could go fishing.

Back on the road armed with fishing license, chest waders, and a dip net, we headed towards Tlell. Before Tlell is a place called Nude beach. No nudes there. Disappointed. It was incredibly calm here. Surprising as the beach is open to Hecate strait. Wading around in the sand having no luck looking for crabs. After a while I talked to a few fellows who were snorkling in the bay. The snorkelers were having great luck catching crabs, and one of them suggested I go over to the rocks. Soon I was on to them. The dungenesse crabs were here. Very nice sized critters. I was thrilled. Soon I had four in the bag and I was heading back to the beach. Matt observed that I looked like Neptune coming out of the water with my bag full of sea creatures. Quickly back to the car, and home so we could make dinner for Katie.

I cleaned the crab on the lawn with Holly helping me. I feasted on crab. I ate one and a half huge crabs. It was out of this world. After dinner we walked to the beach in front of QCC and tossed out the crab remains, and went to the store to get ice cream. $12.99 for Breyers for a liter and a half. Holy crap. Thats Haida Gwaii for you.

What a start to the stay in Haida Gwaii, what will be the next adventure....... 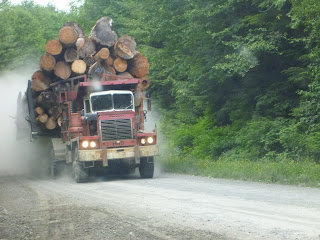 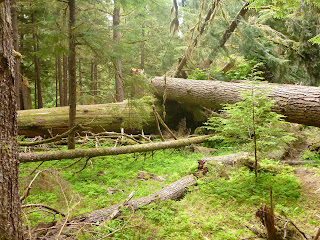 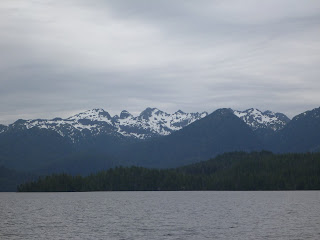 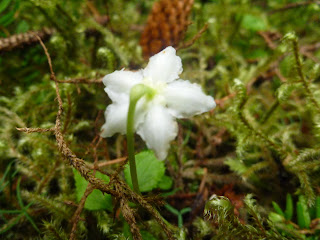 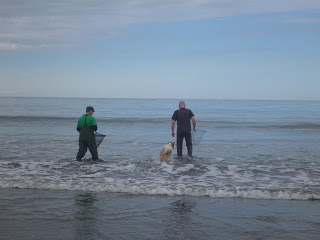 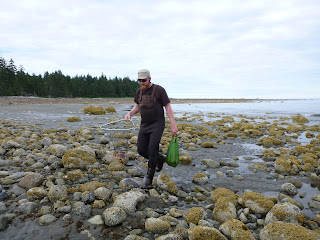 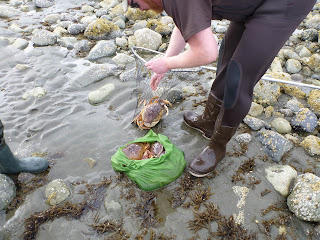