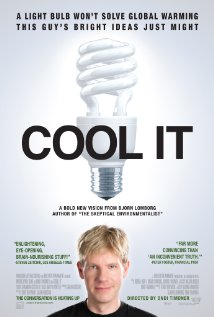 Last night I watched a documentary called "Cool It". It is about Bjorn Lomborg, a Danish author, academic, and environmental writer. His book "The Skeptical Environmentalist" is a controversial piece in the whole scope of climate change.

Lomborg challenges the idea that throwing big money at the Cap and Trade system for controlling carbon emissions is foolish, and it is a system that will be lousy with corruption. The government giving out carbon credits for votes and political support, big companies finding loop holes to avoid having to use their credits and instead selling them for big profit, and the developing world will never agree to capping there economic growth. This system will not work, make the rich richer, and the trickle down will be higher prices and surcharges on the goods you and I purchase. Lomborg states that spending $250 billion a year to bring carbon emissions down to Kyoto standards will only help cool the planet by .8 degrees Fahrenheit in 100 years. Hardly good bang for the buck. Instead he suggests we pour big dollars into R&D to make alternative energy cheaper, look into geo-engineering as a way to us technology to cool the planet, education in the third world, clean water for all, and malaria protection.

I was really intrigued with this film. I hadn't thought about the scare tactics that are used by those who can profit with the climate change, use. "An Inconvenient Truth" is a prime example.(Al Gore has invested heavily in companies that are involved in technology firms working on more efficient electrical grids. he could become the first carbon billionaire. Its not a bad thing, but the movie he made is helping to make him rich. Its a propaganda film) It is all doom and gloom, trying to scare regular people, while the Big Oil, Big Chemical, Big Coal and the third world happily spew millions of tons of carbon into the air. We will not fix the climate by driving hybrids, using C.F.L. light bulbs, and turning off the lights on Earth Hour. We need to move to a carbon neutral society as a whole to actually make these changes. Their were examples of some very cool alternatives such as using solar energy to create hydrogen to use in fuel cells, growing algae to manufacture oil from, new nuclear power plants that leave much less radioactivity in its by-product and are on par with a coal plant in cost of building, and wave power for electricity.

Lomborg talks about getting the most effective change, for the least money. One of the easiest and cheapest is    to paint surfaces in urban heat islands(this is basically the fact that city's are much hotter than rural areas because of all the black surfaces absorbing heat into the earth) white to reflect the suns rays back into space. Cooler spaces mean less air conditioning, less energy use. The bang for the buck theory falls right in line with cycling, and building infrastructure bicycle transportation easier. He didn't speak of cycling in the film, but there was several shot of him riding his bike around Copenhagen.

There were things that weren't touched on in this movie. He didn't talk about population control, although education in the third world could help this. I think we need to slow the growth of how many bodies are on this planet. Garbage and pollution weren't included either. I guess his focus is on Climate Change rather than some other issues.

I would recommend this film if you are concerned and would like to learn a different way to look at fixing a warming planet. I ordered the book, and I will be reading it on my bike tour.

Re-Happy
Posted by Blayne Prowse at 7:55 AM