After taking a break last weekend to watch the snow fall and work on building a 1300 piece lego project, we got out for a quick adventure this afternoon. I had spent most of the weekend canning and smoking salmon. I had about 30 pounds still in my freezer from the summer that I needed to process so after about 10 hours over two days I had it all wrapped up and needed to get out for some sunshine. Plus there was a bowl full of salmon trimmings that needed to go to the beach to feed the gulls, crows and eagles.

Natalie decided that we would first go to Royston to "compost" the salmon remains. As we left Cumberland, yet again, hail began to fall. It has been such a random weather month. One minute the sun is out, then suddenly snow or hail or rain will come from the skies. We arrived to the sun shining and the tide high. I wanted to try to get pictures of the feathered friends that would cruise in for a meal. I didn't put the bait out too far onto the beach. We waited for about a minute until the first gulls and crows showed up for a feast. Unfortunately we were to close to the pile and the birds wouldn't approach so we retreated to the car. Then they came in without hesitation and a feeding frenzy was on. Those gull are such pigs, as Natalie claimed. They can gobble up so much food in a hurry. Soon we saw a larger bird gliding in from a distance. He had a black body and a bright white head. The American Widgeon ducks that were in the bay scattered at its presence. He circled over the car and before I was able to ready the camera, swooped in and snatched a salmon head off the cobblestone beach. Damn, I missed that opportunity. After several more minutes after the gulls had eaten all the rest of the trimmings another eagle approached from the east and this time I was ready. I put the camera on video mode and captured it as it flew away with dinner. We were impressed with its speed and grace. The action was over so it was time to head back to Cumberland.


I wanted to take Natalie to a waterfall close to the Comox Lake campground for sometime now. I am not sure of the height of this fall, but I estimate it at over 200 feet. I believe this is a prime rock climbing bluff, as there is a well defined trail off the road to the base of the falls. The trail is marked with a gigantic boulder some 15 feet high and nearly the same in diameter. A short walk up a fairly steep trail brings you to the bottom. Not a huge amount of water dropping from the sky, but it makes up for it in beauty. Hundreds of small streams run off the face down to the bottom pool, the rocks lined with moss and licorice fern. A true place of beauty, and some quite large western red cedar trees to boot. Natalie got dizzy looking skyward up at the rocks and trees. This is another majestic beauty in our back yard in the Comox Valley. 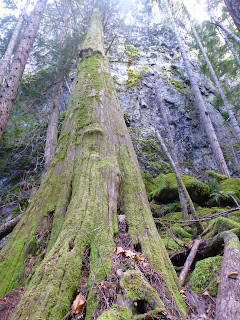 Our next and final stop was the old China Town site, between the Village of Cumberland and the Comox Lake campground. It is impossible to miss. It is marked by a rustic log cabin at a pull out, off the Comox Lake road. This is Jumbo's cabin. To my knowledge, Jumbo was the last person to live in China Town. Cumberland has a rich history in coal mining, and at one time, had the largest China Town on the west coast outside of San Francisco. This once thriving community was torn down in the early 70's and has now been reclaimed by the forest and the swamp. The area is being remembered with plaques and signs marking where buildings once stood. A picnic pavilion has been erected with a dedication to the Chinese people who once live here. With out the labor of these foreign workers, the Cumberland mines would not have been as successful. I feel that it is important to remember the sacrifices that these people made so our community could be built. We walked along and looked at the signs along the trail, pondering how a building once stood where now it is a swamp. I think the beavers might have something to do with this. A nice beaver dam can be seen just before the gate on the left hand side when entering the China Town site. 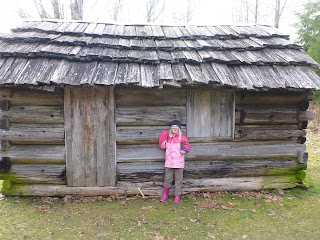 We continued down the road, past where the Cumberland Rod and Gun once had a clubhouse and shooting range. At the end of the road the Cumberland Community Forest starts. The terminus of three different downhill mountain biking trails is at this point, and I wanted to check it out. We crossed a small rivulet over a bridge and soon came to a skookum new cedar bridge, much more professionally built than ones normally constructed by trail builders. It was beautiful, as was Perseverance creek, which was running gin clear. There are little sandy beaches and smooth stone stretches. I was really impressed and wondered why I never explored more back here. More large trees, lots of green and still some remaining snow. I also was drawn to another nice waterfall in through the forest. Gorgeous. I will be back. By this time Natalie was getting tired and we played a chase game on the way back to the car.

I had a quick look to see if the stinging nettle had started growing yet, but didn't see much. I will have to wait for another few weeks. For a very impromptu adventure we sure found some. Next weekend we will be off to Ucluelet to find adventure over on the west coast of our wonderful island. Go find some for yourself.
Posted by Blayne Prowse at 7:48 PM