The other day Natalie asked me if I could take her fishing in the ocean. With a grin I said absolutely. After her last experience fishing in Lower Campbell lake a couple weeks ago she is hooked on the sport. I just can not believe how she has gotten turned on by the sports that she showed a complete lack of interest in before. With biking, backpacking, and fishing, she has turned into a very great partner for more adventure than I though she was up for. And I am beaming about it!
We scooted down to Union Bay this past Thursday to try our hand for some bullheads, or sculpins. They are a small bottom fish that can grow up to about eight inches long. I have seen some really large ones caught over the years. As a kid if you caught a really big one, we called them cross skulls, you were part of legend. I fished the waters around Union Bay all summer between the ages of 10 and 13, catching more bullheads than I can ever remember. We were not the kindest to these little, strange looking creatures. I will not go into detail, but we were terrible pre-teen boys trying to impress each other. The muddy, relativly flat bottom of the boat launch area of Union Bay is prime habitat for these little ambush hunters. A bull head will eat pretty much anything that it can possibly get in it's mouth. Our favorite bait back in the day was to use hotdogs. I remember finding week old hotdogs in my tacklebox, dryed out and smelly. Once I even found a dead bullhead in my box. I thing it still has that odour lingering, even after two plus decades. Bullhead tails were a favorite bait, as were crabs, "China Hats" or limpets, perch or salmon bits. Invariably we would always have a "meat line" out. A heavy twine with either a full bullhead or a salmon head and giant hooks. We were shark fishing and would often catch dogfish in the same area. Now that was excitement!

With the traditional fishing set-up of a light spinning rod, a couple of spinners, hooks, weights, power bait and a bag of Miss Vickies we were set for some action. I allowed Natalie to thread the line up through the eyes on her rod and tie up the hook. We added a bobber to the line and bait on the hook. We were fishing. We devoured the chips in no time and were having no luck with the bobber set up. So to make it more fun for Natalie I switched the bait and bobber for a spinner so she could at least cast and retrieve. Much more fun and interactive. I remember as a kid I loathed trolling. It was all my dad wanted to do. I read fishing magazines and stories of guys catching salmon on Buzzbombs and Zzingers, driftfishing. That was what I wanted to do. Drop a lure to bottom, jig it up and down and see what you can get. My uncle used to let me do just this and once I caught an eight pound chinook bottom bouncing for bullheads at Pallister Rock. That was cool! 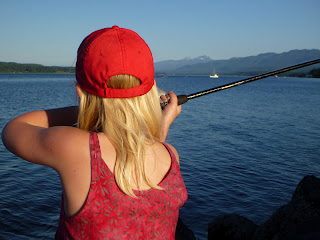 She casted and casted. I took pictures and regaled her with stories of when I was young. The tales of hotdog bait and dogfish and how terrible we were back then, wasteful. She totally gets it. I know one thing for sure. All my conservative talk has rubbed off on her(not the Steven Harper kind). I love that she gets that we need to look after our critters, plants and finned friends. She understands how impactful we can be as humans and that change needs to happen. This is where the change will happen. I can try to influence people from far and wide but our next generation will be where the real differences are going to come from.
We managed to get a total of no bites and no nibbles. Natalie had lots of practice tossing out the line. She snagged rocks and seaweed but learned how to free the hook from its impediment. I enjoyed just being at the ocean with the magnificent views down Baynes Sound, Mt Arrowsmith and the Beaufort Range. Tree Island and Denman just blocking the Salish Sea and Texada Island. What a place I grew up and to share with my daughter one of my most favorite hobbies as a youth was incredibly special. We will return, with small marabou jigs tipped with bait. Those little suckers live on the bottom, so we will go down to them and next time she will catch one, and that picture will be the most precious that I could take. Find Adventure.
Posted by Blayne Prowse at 8:19 PM